How to guide - replace the electrical hookup unit (broken flap)

If anyone is interested I replaced the EHU unit on the side of the Cali today. Mine is a 2008 SE but I imagine the later models are identical. I have some pictures and narrative in case it helps anyone in future. The difficulty level is on a par with re-wiring a plug - if you wouldn't think twice about opening up a plug, this should present no difficulty. Total time was 45 minutes, including taking the pictures and a break for lunch

Before I started I flipped off the RCD circuit breaker in the rear cupboard, just in case the batteries managed to send power back out of the hookup. 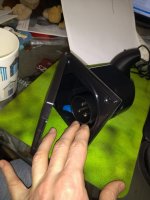 First thing to do is undo a small screw on the new unit and pull the back off.

Inspecting it it has three cable clamps (white in this picture) where you can trap the incoming wire to hold it firm, so you need to choose which way the cable will come in later.

In the centre are 3 holes - the top is the earth, left is the Neutral and right is for the Live wire . 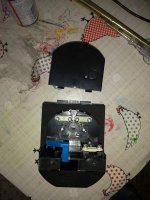 Going out to the Cali, you remove the 4 screws in the corner of the hookup unit and then the entire centre section pulls forwards and out. It has plenty of wire on it - mine was only slightly awkward to remove because the previous socket fitted had the wires coming out of the side of the socket which meant it had to be wiggled and tugged a bit more than I would have liked in order to get it free, I had to be careful not to damage the outer plastic cover which is pictured still on the Cali.

You can see my old unit has a different colour front and back, and the back was held on with gaffer tape so this clearly wasn't the first time this has been done! 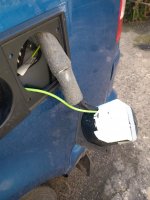 Pop the back off of the old unit and you can see the wires clamped on the way in, then one connection to Earth, Live and Neutral. Simple job to unscrew to leave the wires hanging fee.

Happily the wires had crimp terminals on the end so were easy to re-use straight into the new unit - no need to strip back fresh wire. 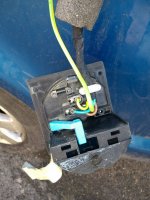 In order to make the unit easier to put back, I chose to use the rear exit from the unit for the cable entry. This meant knocking out the part-cut hole in the cover and making it smooth - then importantly putting the wire through the back of the hole first - then making the three connections.

I then had to fiddle the wires onto the unit where I could do up the cable clamp - this was the hardest part of the whole process, be much easier if you had an extra hand or tail to hold it down. 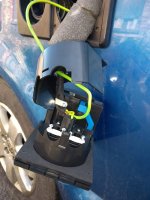 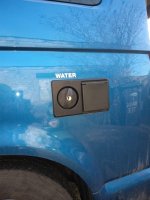 Finally an inspection of the failed unit, the metal bar that held the flap in place had deformed and failed - it looks like the old one was hollow (and hence weak) , had been flatted and failed at both ends.

The new unit seems to have a solid metal bar - hopefully will last longer and pushed shut with a satisfying click. 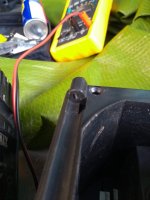 Thank you for the great tutorial

Home is where you park it !

Excellent thanks for sharing.