So here are the results of a very interrupted first attempt.
Many things to note.
1) I'm rubbish at it
2) I hate doing it
3) It takes me too long even without interruptions.

When I choose a vehicle I often consider how well it will hide the dirt so that I can increase the periods between washing it. The down side of that means that when I do wash it, there is generally less reward than seeing an amazing transformation that you get with colours that don't hide the dirt.

I don't think the Cali was cleaned and waxed very well when I picked it up and that was proven when I washed it today. But due to moving house around the same time I was on to my dealer for a quick delivery and despite feeling it wasn't that quick, I know he tried very hard to accommodate and with a cleaning contractor seeing out its last week at the dealers I doubt they were very particular. This did show on hand over with sticky waxy patches here and there but hey I was so excited I just needed it right there and then so accepted it how it was. So next up we had 2 months of very poor weather where most of its time on the road was spent amongst motorway spray. At the time I wrote this I know anyone reading it doesn't need a reminder of our current weather but who knows when you are reading it.
So finally.....
A 2 bucket job on the wheels. A bit difficult to get in everywhere even with my trusty wheel woolies. So the front wheels simply don't have enough clearance between the discs, pad housing to get to the inner areas and even for the back ones you can only do so much. I moved the van slightly at one point to avoid the housings and at least get my efforts even all round the wheels. In that time alone I was stopped by 2 new neighbours introducing themselves...bless!!!
Then onto hosing down the bodywork & shampooing it. Quite difficult to reach the roof so looks like I'll being investing in some kind of step/platform thats big enough. Again a 2 bucket job. Lots of dirt on the meguires mitten but as already mentioned no huge transformation. Before I'd finished that 2 more introductions and a tour of my next door neighbours!
I have used meguires gold class shampoo for years but had run out of wax so I got some meguires Ultimate after not rating the durability of their techwax 2.0 that I have endured for the last couple of years. Gave it a generous coat all over unsure whether it would whiten back plastic so went sparingly around those areas. Ah look here comes another neighbour and old friend!!! Geez will I ever get this finished?
As the wax dried on the bodywork it was quite hard to see but as I resumed my swirling efforts I could feel the difference through the applicator pad in patches where there was not a previous coat of wax applied at the dealers. In a nut shell it felt rougher. I confess I skipped the roof with the wax until I can reach properly.
Finally I polished the dry wax with the microfibre cloth and cleaned the glass.
Sure it looks fine but not the easiest job in the world for a muppet like me and I wont let anyone else do it. 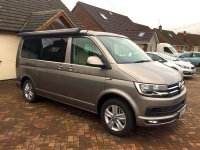 Looks good! I still have some swisswax left over from when I had my mk2 gti show car. I can’t wait to get it on the cali but too much grime on road im always washing it. ROLL ON NICE WEATHER

Finally got a coat of wax on today.