Lasagne & roasties in the Cobb

Again only in the garden due to lockdown 2. But this could easily be made outdoors when camping. It could all be done with 1 pan and a dish. All thCobb stuff fits in one bag.

10 Aussie charcoal heat beads, 1 firelighter and Kellie kettle to start them off. Whilst going grey there was enough heat to par boil the potatoes for 10 minutes. 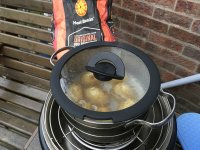 Potatoes were drained and left to air dry and vent the steam.

Then onions, carrot and celery were fried off and beef mince and garlic added. 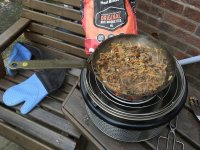 Next the white roux sauce: butter, flour, milk, grated nutmeg and ground pepper - no salt as grated cheddar cheese was beaten in. 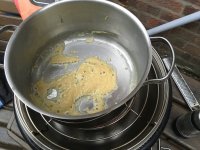 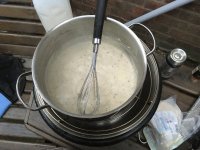 All the “hob-type” cooking done so grill plate & roasting rack in place and lid put on the Cobb to heat the oven. After a little while the potatoes were rubbed with oil and put on the rack in the Cobb.

Building the lasagne: a layer of the meat/tomato mix topped with sliced mushrooms 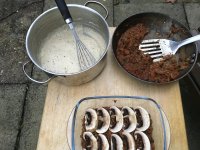 For the top layer I had some cauliflower cheese left over from the weekend and mixed it with the rest of the white sauce and plastered it over. Grated Pecorino Romano to finish.

I thought I’d have to cook over 2 levels but the potatoes fitted nicely a ring around the lasagne dish. The dish is quite deep so it’ll need a bit longer than usual. 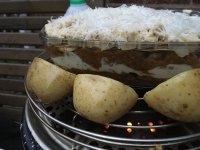 I opened the Cobb Air lid holes fully to get a good draw of air through to cooker for high heat so the potatoes will crisp and the lasagne top will crisp and go hard (just how I like them).

It was getting a bit cold and windy so I put a towel around the lid to keep the heat in, being careful not to cover the lid holes or the gap between bowl and lid, and fixed it with wooden pegs. Then put the whole thing in a flexi tub to keep the wind off, making sure there was a gap down the sides for the air to get to the bottom of the Cobb. 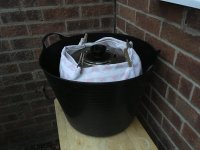 It’s dark now so I’m just leaving it out in the garden to do it’s stuff.

Update: Delicious. Potatoes - nice and hard shells but soft in the middle. The lasagne top hard and crunchy.

For people who like a sloppier underbelly, put a bit more chicken stock or tomato juice in the meat/tomato mix &/or milk in the white sauce. 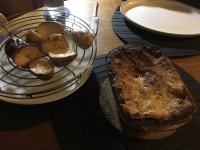 This would be even yummier with homemade fresh pasta sheets. You can make it at home, wrap it in cling film and store in the fridge. I have a length of thick dowel for a van rolling pin (you could use a beer/wine bottle as a roller).
Last edited: Nov 11, 2020

Super suggestion. I usually use Cobb Stones which stay really hot for a couple of hours, even up here in Aberdeen. But they were out of stock and so got the coconut briquettes which are struggling to maintain enough heat (when I fill the moat with liquid and add smoking pellets) to cook what I can usually do with heat to spare for starter or desert... so the towel etc. trick is a great tip. Thanks.
L

That looks amazing. Like the tea towel trick too- reminded me that I had been looking at this a while back https://wonderbag.ie/shop/wonderbag/
might be a bit bulky for the road though...

Lll said:
That looks amazing. Like the tea towel trick too- reminded me that I had been looking at this a while back https://wonderbag.ie/shop/wonderbag/
might be a bit bulky for the road though...
Click to expand...

When I get time I'll measure the bag with all the Cobb stuff in it. I take mine in the Cali. It fits easily under the parcel shelf.

A wonderbag is an old fashioned type of thermal cooker, search for Mr D in the forum search and you'll find lots of info on it. The Cobb is a charcoal grill/oven/bbq and quite different.
L

Thanks - cobb (and your creations) look super.

I appreciate that they are different "animals" !

Lll said:
Thanks - cobb (and your creations) look super.

I appreciate that they are different "animals" !
Click to expand...

Are you thinking of getting a Cobb, Lll?
L

Elly Swanson said:
Are you thinking of getting a Cobb, Lll?
Click to expand...

I'm definitely interested - I'm going to hold fire on making too many purchases until the vehicles arrives (and goodness knows when that will be!)

Lll said:
I'm definitely interested - I'm going to hold fire on making too many purchases until the vehicles arrives (and goodness knows when that will be!)
Click to expand...

Cobb UK have 20% of at the moment for Black Friday sale.
L

Elly Swanson said:
Cobb UK have 20% of at the moment for Black Friday sale.
Click to expand...