My review on the Atera Strada Evo 3+1 on 2015 California SE with factory fitted Westfalia detachable towbar.

I wanted a four bike rack and choose this model as the bikes have more clearance between them and I found it aesthetically the best looking. I also wanted a very sturdy bike rack as others I have had and read reviews on bounce a lot on the move and despite never having problem, it slightly unnerves me to see them do this. I also wanted one that had easy to remove/place arms to attach the bikes securely.

I wasn't disappointed, it is very solid and feels rock solid when mounted, it is a little on the heavy side and whilst I found the rack very easy to put on and remove, It is bulky and would be a lot easier for two people to mount/remove. The fourth bike adapter is removable by just pulling out some pins so if you only occasionally carry four bikes its not much effort to put on/off.

I like the sliding wheel mounts which ensure the bikes are very stable and adjustable for different size bikes and also means you can position the bikes further to the left or right which could help with clearance depending on which bikes you have next to each other. The lockable arms are detachable and easy to position and even thou look like they are plastic straps are steel coated straps.

Out of the box it was all a bit stiff and with more use it has all become a bit easier to use now. 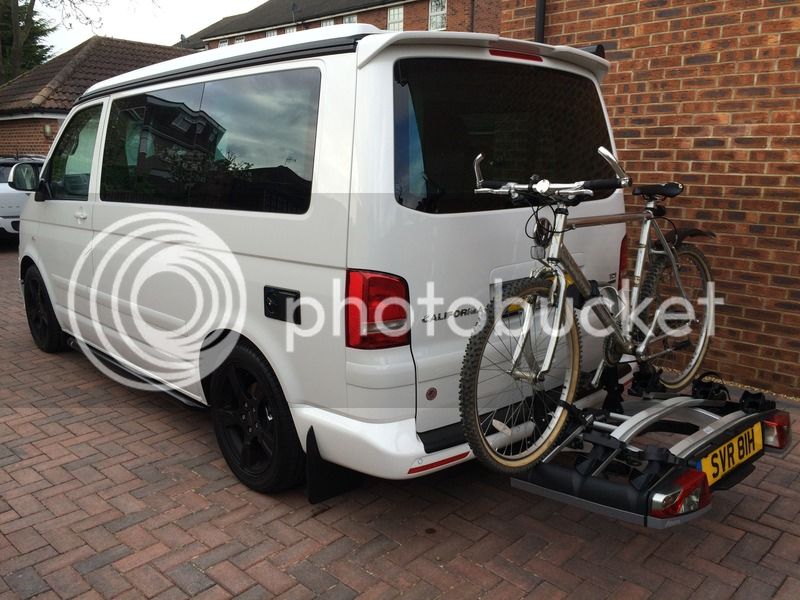 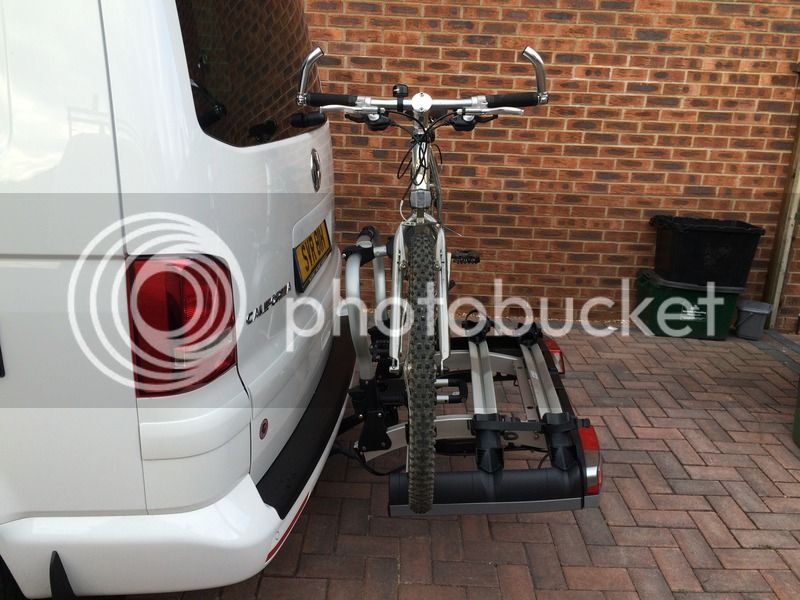 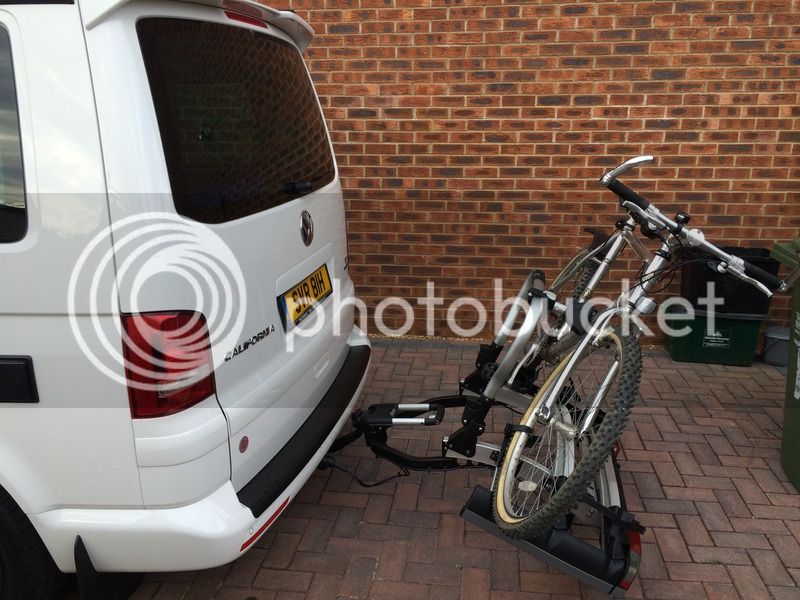 Time for the Important bit.. will the California tailgate open with it. The answer to this is yes and no. 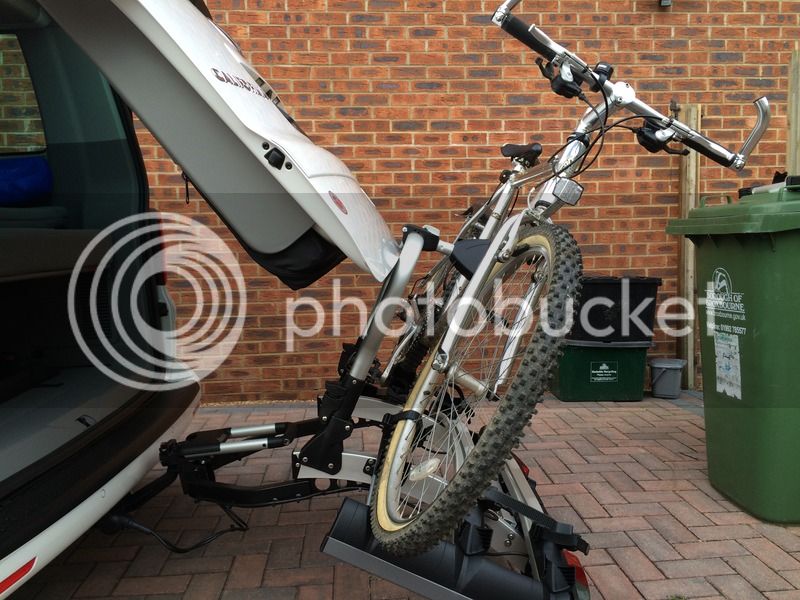 With the four bike adapter added 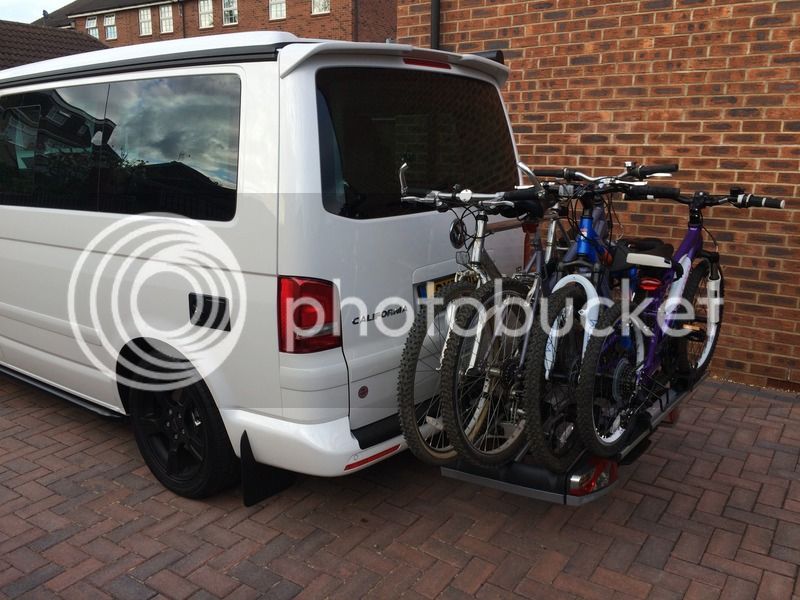 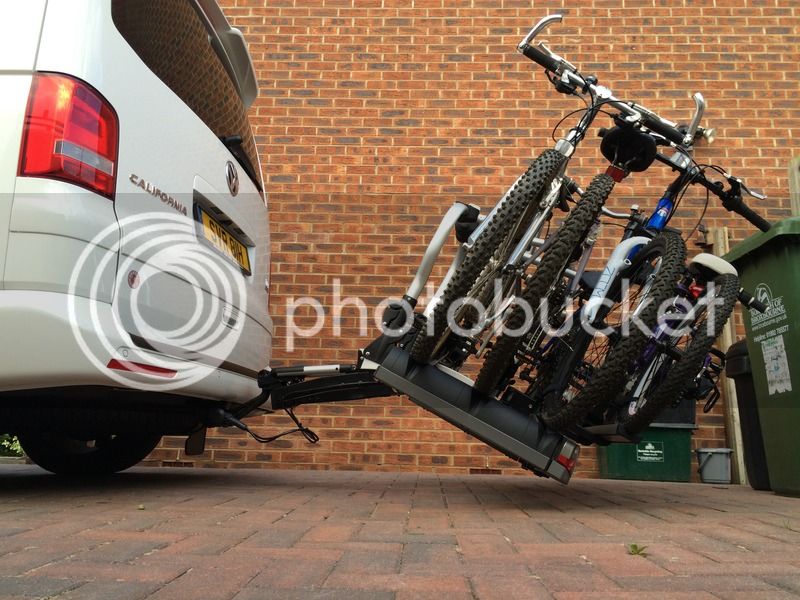 Again same thing with the clearance on the rear bar but with more bikes (more weight) it only just touches the bar now. 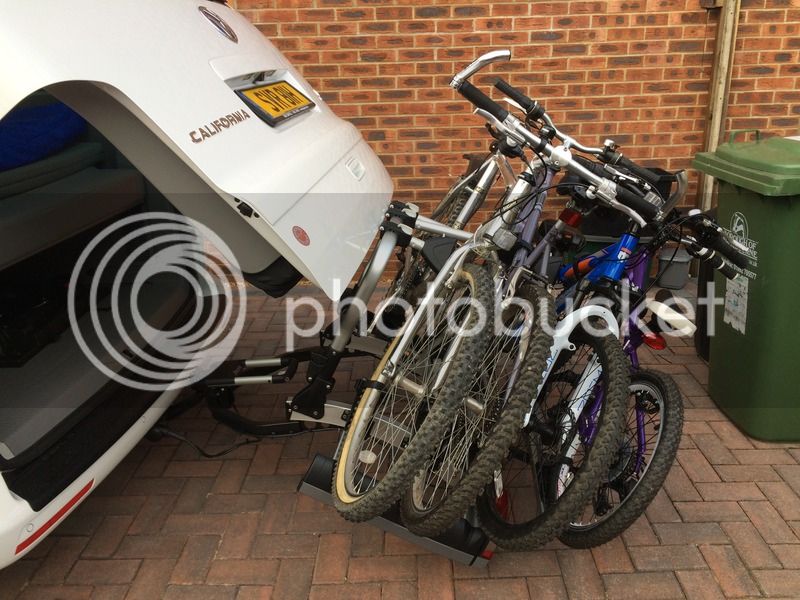 Then the next issue it the bike handle clearance again despite being almost a inch over by just pulling the bike forward you can clear it. If I had placed my daughters bike in the rear position possibly I wouldn't have had this problem at all. 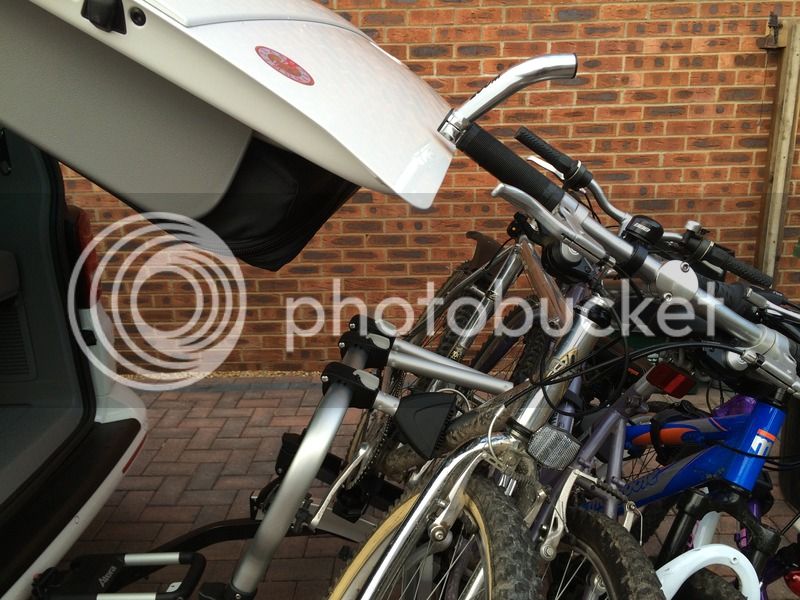 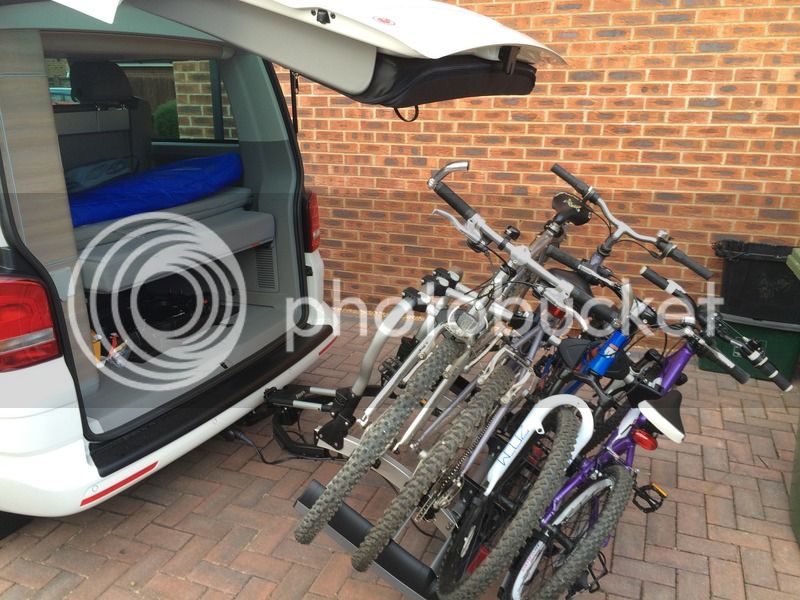 In summary.. its a very solid well made piece of kit that looks great and with a bit of care the tailgate can be opened fine but its a shame the rear bar isn't slightly adjustable as a few mm's forward and I think it would have cleared fine without applying any pressure. 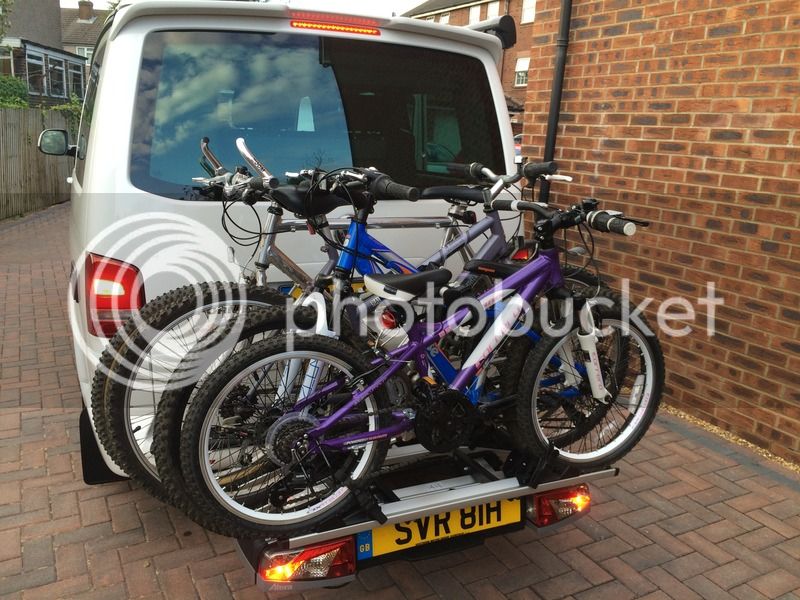 Reversing camera's not much use with it thou! lol 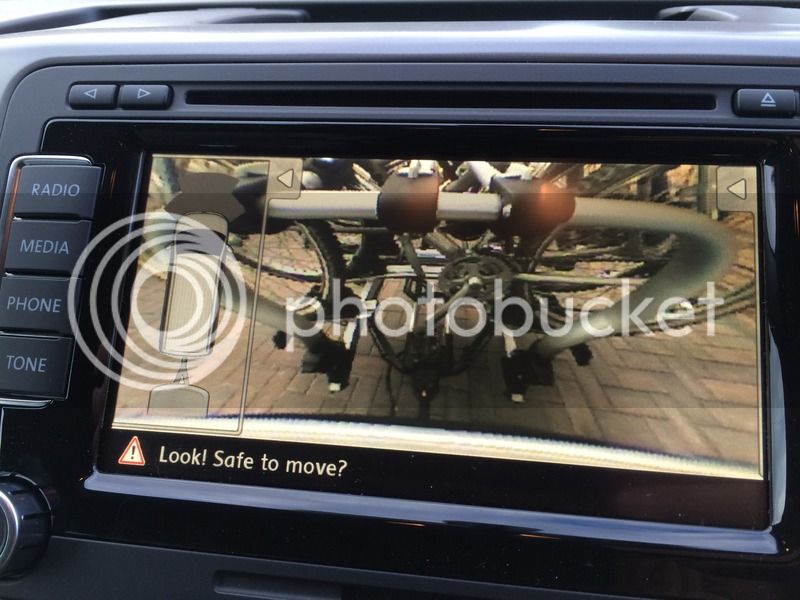 Great review. I have been thinking about getting one these. Thanks for the info.

I've bought the same. Agree with everything in the review

Hi rippers
thank you for this super review. i am doing some research about Atera and there bike racks and i find it hard to decide. the Strada dl3 should fit the problem about the tailgate.. should. There are some owners who had the same problem with the handbars of there MTB/Downhill bikes so i am still trying tonfigure out which one i should buy. Anyway thanks again for that great review with this super pics.

Great review. Very clearly set out. In a similar position down to the Strada dl3 or Evo 3+1 or as I'm not getting any younger the Sport 3 as it will carry electric bikes. Probably the dl3 as it's tried and trusted by folks on here to clear the tailgate. Most of the time I will only need to carry two bikes so these can go on the back two rails and have no handlebar issues with the tailgate. On some occasions I will need room for three. Now to decide?


Sent from my iPad using Tapatalk

Yes we have the DL version and the tailgate clears it (just). If you have a bike on the rack nearest the tailgate, you do need to turn the handlebars
N

Hve been usin gmy DL3 now for 18 months. Mainly with 3 bikes on it with wide bars - tailgate does foul a little bit but you just ease it past the handlebars. Needs a bit of silicone spraying as well after a winter journey - had one incident recently when it was really cold and snowy, drove down the road and the 'closed' rack slid backwards ! No damage to anything but now deice the mechanism when its really snowy
You must log in or register to reply here.