I have a 2010 180 DSG Cali last Sunday 2 miles from home it went into limp mode with the flashing coil symbol up on the display. Called VW assistance and RAC turned up within 30 mins and as i lived close by they escorted me back home and arranged for transfer to my local dealership which is 30 miles away. The recovery vehicle turned up the next morning to schedule and took the vehicle to Anthony's the VW dealership in Aberwrystwth , I had 3 calls from VW assistance that Monday morning, 2 to tell me they were coming and 1 to check the vehicle had been picked up.The garage rang me that afternoon to say they had received the vehicle and were looking at the fault codes they were busy in the workshop that week but would do their best. On Friday i received a call to come and pick it up they had to fit a complete new EGR valve which i believe is about a day's work on the 180DSG. So disappointed in a engine failure in a vehicle that has only done 15,000 miles but top marks to VW assistance and Anthony's of Aberwrystwth for their response. Not sure how many of you have had this problem or will get it but hope you get the same service. keith

Took about a week all told from limp home mode/recovery to van returning from dealer. I wasn't impressed.

One of the reasons why I got rid of ours.

Its a bit worrying if this turns out to be a reoccurring component failure for post 2010 models. Has anyone had this valve replaced on earlier models. If its a days work to replace out of warranty i can see this being an expensive fix. Its a bit worrying as you get no warning my van had been running perfectly from purchase till this breakdown but hopefully with a new part the feeling of playing russian roulette on long trips will wear off. keith
M

Those symptoms are exactly like ours. I got 'some warning' something wasn't right however.

Drove to work fine in the morning. The wife went shopping in it at lunch.

When we drove home there seemed to be a slightly longer delay (hesitancy to throttle application) when accelerating from standstill (DSG remember has this anyway).

Following morning dash light, & limp mode on the way to the dealer requiring recovery as its 35 miles away & VW assist (RAC) couldn't fix on our drive as requires bumper/front ancilliary removal to access by all accounts.

Sorry to hear that Mickeyblue hope you get sorted quickly, can i ask how old and what milage your cali is. keith
M

Seems a bit hasty to sell such a nice van on 1 issue??

Tangle Foot said:
Seems a bit hasty to sell such a nice van on 1 issue??
Click to expand...

Micky said it was one of the reasons he sold it not the only reason.

Tangle Foot said:
Seems a bit hasty to sell such a nice van on 1 issue??
Click to expand...

One of the reasons why I got rid of ours.
S

EGR Failure isn't restricted to California or T5's. It's not at all uncommon in a wide range of engines.

Why does the EGR valve fail? Is it just a random event, is it attributable to usage ie lots of short runs or is it endemic to the design and failure is pretty much inevitable at relatively low mileage (like a Rover K-series head gasket)? Are the replacement valves to the same spec or a modified design?
S

Alex is probably best placed to give details on the failure mode but I suspect like most others it's clogging.

The oily/soot deposits play havoc with them.
S

I found some pictures on google - 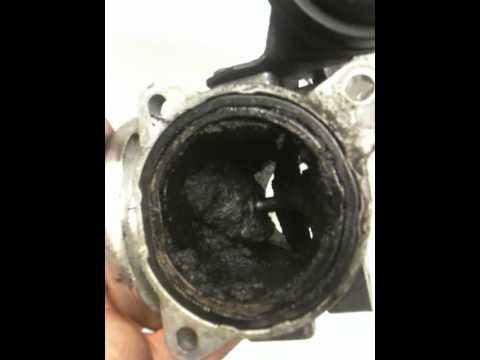 I feel sick just looking at that...

Having chatted at length to the RAC / VW assist tech who tried to help me he stated that although EGR failure was more + more common on lots of vehicles, it was only a 'stranded nothing we can do as a temp fix' on some. Sadly that includes the T5 facelift 2litre diesels.

He stated they could quite often either fashion a blanking plate to fool the ECU out of limp home so you could drive to the dealer, or there were ways using the OBDC ECU software, of telling the car to keep the warning light but not go into limp home. Again to safely get to the dealer ASAP.

As a second point they can often get EGR valves and swop them at the road side/ at home on the drive for many vehicles. Sadly this they would not attempt on a T5 as it has awful access & requires a lot of the front end off so a workshop only job. That is my issue with the design.

They fail fairly regularly so why not make it/design it so its easy to fix either as a temp measure in the software or access, or permanently??

My EGR has just failed and is being replaced tomorrow. Hope they get it done because they're just ordering the part now and it sounds like a long job.
That's on a 140 2010 with 23k on the clock.
S

Hopefully you won't be off the road for too long

I think normal parts ordering has to be done before 3pm for next day delivery assuming the part is in UK stock, which I would think it is. There is also a facility for later orders, VoR (Vehicle off the road) so you should be ok for the parts.

As reported by other members, it was off the road for a week as most of the front end of the vehicle has to be removed to access the component. Between this and the fear of roof bellows failure, I don't know when I will be brave enough to place an order for my new Cali.

Had warning lights on last week and just entered limp mode as i pulled into my drive at home. Called Rac VW breakdown service next day and they were out within the hour. They changed the egr in about an hour and everything fine since.
This on a 60 plate 140 with 14k miles.
Fantastic service from them and obviously very common as they always carry the spare ones.
Not good that so many vans suffer this and alright for those of us with remaining warranty in place but expensive for those that don't have it. Would have been close on £400 to repair as the part is approx £260 on its own!

Hmmmmm, so I had an EGR replacement back in October 2012, less than 6 months ago!
Now today my glow plug light has started to flash and says engine fault and to take it to the workshop.
Surely it hasn't failed again in less than 6 months!!!! If it has, would I have to fit the cost for this? and when is it going to happen again.

Sorry to hear that. If it is the same egr valve it should be covered I believe vw parts carry a 2 year warranty

bit of a bummer though had mine done last september

I have had 2 replaced.......then had the same problem a few days after pick up. They replaced the vacuum pipes or something and it cured the issue. Apparently it shows the same symptoms......
You must log in or register to reply here.