Howdy all,
I finally got the last piece of faulty equipment replaced on the van - the fresh water tank sensor (a common fault).
I found a replacement gauge online (second hand, though assured of its working state).
It's arrived and working fine, hurray!
... but even though I've replaced like for like (same part number as was removed), upon reflection I'm questioning of indeed it is the right one??
My van is from 2001, with the tank in the left hand side, inside the wardrobe.
It's the length of the sensor I'm questioning. It doesn't seem long enough to be giving a reflection of the actual water level...
I wouldn't have questioned it as it is the same part number, but the guy I bought it from did have a couple of variations, longer versions different part numbers (one was quoted as being for an Exclusive, but indeed there were 2 listed for California, the part I needed and a longer one - same fittings).

So, here's a question I never wanted to ask..

How long is yours? (and for all our sanity, keep it clean!)
And what part number is marked on yours?
(Of course I'm only interested if you have the same tank)

There me be measurements on the gunzl site.

According to the official diagram it should be 270mm… 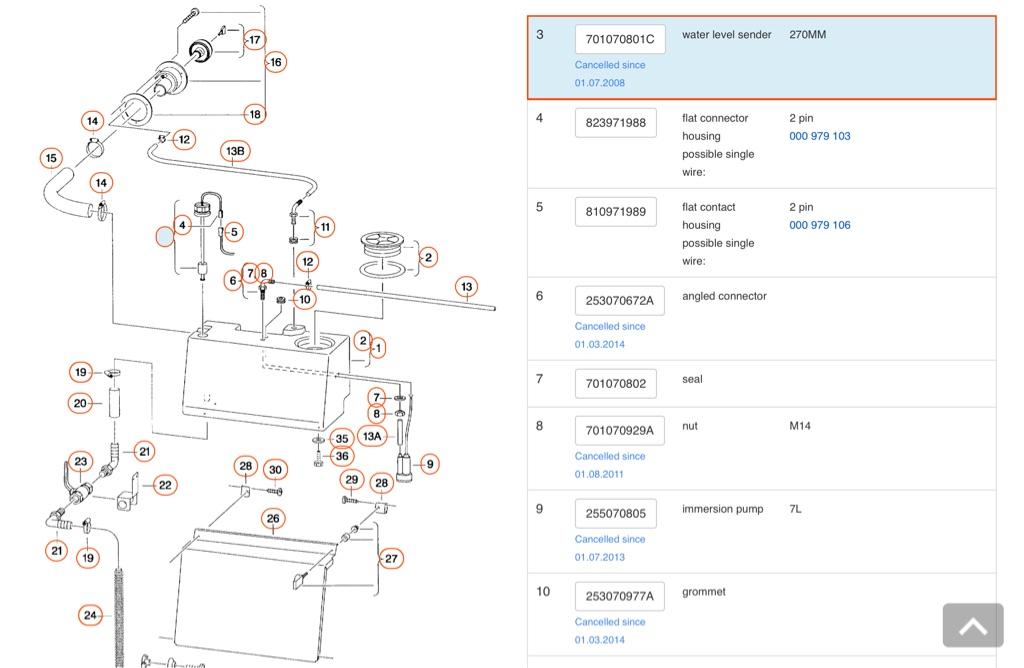 Sent from my iPad using Tapatalk

By the way, should anyone need a 36cm sensor (maybe though from Marco-polo or Nugget?):

or the one for the Exclusive (allegedly, 42cm):

These are in Germany, but can of course be posted... (and the guy is negotiable to a point)...

Changed ours not long after we got it. Eleven years ago now. That flew by. Not a cheap thing given how rudimentary the circuit is. I kept the original one for a few years with the best intention of opening it up to fix things. Never did. Yet.

It’s a pretty simple circuit though - the float has a magnet in it which operates reed switches at three points along the shaft (oo-er missus) as the tank is emptied, each switch either adds resistance (or removes it, I never got to work that bit out). As it does so the display reduces the blocks on the display.

Glad to hear your replacement matches the original spec.

They cost a fortune new !


Sent from my iPhone using Tapatalk
Click to expand...

Sure do. They were slightly cheaper nine years ago. Only slightly though.