On my 1998 van I have a lower dash console that is simply a large open cubby space. I see one on eBay that has the same cubby space and also appears to have a glove box compartment underneath. Were there multiple models of the lower dash console for the same production year? Is there one that had cup holders?

What has got me interested is that I have seen some people that have placed a double din radio in the lower dash console, instead of modifying the normal radio spot in the dash, and I am not sure which model of the console they may have started with.

Are you talking about the central section down in front of the gear stick?
If you have the open cubby box with the deeper bottle space to the right then you’re in luck. They are quite rare and pricey.
The flap below that you refer to is to access the optional CD player. I have all of the above.

possibly the reason people put double din units down below as opposed to up top in the dash is RHD/LHD vans. LHD vans have different steering column structures allowing a double din unit. RHD unit can only accommodate single din.
J

Sidepod, thanks for the quick reply. I have seen you say that in other threads and hoped it was true in my LHD van. It does appear there is a bar going across where a double din player would go. What do you think? 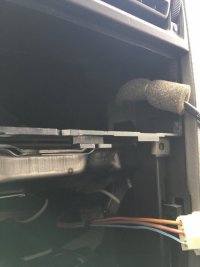 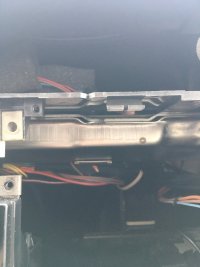 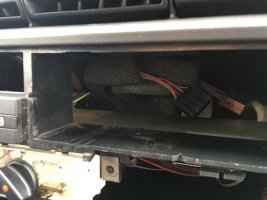 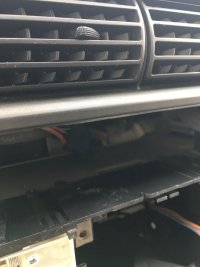 Hmm not easy to tell from those pics. Does the division in the middle come out?

You can get Double Fin size screens with just a single din at the rear, if that make sense?
J

Everything you see that is metal in the pictures is the bar that goes right under where the radio sits. It is about 3 inches deep and about 1 inch high with the molded part on the bottom as shown in the pictures. The black plastic is just a frame part for the radio. I can't see where it ends on the far left near the steering wheel but when it heads to the right/passenger side there appears to be two bolts holding it in place.

Ok so the black plastic divide will come out and you can fit the double din cage like so. 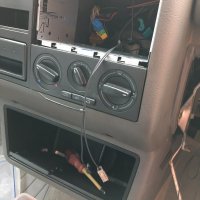 How to take the dash apart?!