Well, as this subforum says, "A place to tell everyone about your pride and joy", so deciced to open a new thread here even there's something about my Calis - both the past and these present - under "Introduce yourself": https://vwcaliforniaclub.com/threads/californist-from-finland.43258/

So the vehicle in question is rather ordinary T5 California Comfortline from 2005.

Almost straight after I bought this one ordered AP Coilovers, obtained a set of original 19" Canteras from a VW Amarok, installed Fiamma bike rack and after some smaller cleaning/polishing - like removing the TDI-lettering from the trunk - just enjoyed the season for quite sharp 10.000 kms.

This is from our last weekend out in mid October and since then it's been in garage. 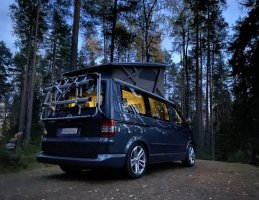 Brakes: One project I knew would be coming soon was front brake renewal: I don't think the front pads would have lasted another season as there wasn't much until the wear indicator had come on. As the discs were clearly getting too thin as well that gave an great opportunity (or excuse?) for going for a bit larger brakes at the same. Yes there would be all kinds of fancy setups with Porsche calipers etc. but starting from original 308mm discs and TRW's 1-piston calipers even 340mm discs and 2-pot Ate-calipers (PR4 from 2010 onwards) are definitely an upgrade so got a pair of such from a stripper bay, got those sandblasted, painted, renewed all rubber parts and fitted with new discs and pads. Currently the stock rear calipers are off from the car getting a similar clean-up. Hopefully will get that finished soon as that's the biggest thing to be yet done before starting this season 2022. 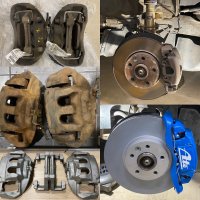 DRL's: Another small sub-project got started already last summer, superseding the original front fogs with some daytime-running-lights. As the glass on r/h lamp was already broken it didn't feel too bad to utilize just the housing where I then fitted some universal LED DRL's (need to take one more picture with the lights on once have a chance). Thanks to a hint from another forum found out that there's actually separate TFL-pin (DRL in German) at light switch which is powered when the ignition is on but will drop the voltage as soon as parking or driving lights are turned on. So for wiring it was enough to push out and relocate the front fog light cord, now the DRL's are using original harness (with a modified connector at the lamp end). 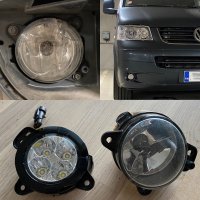 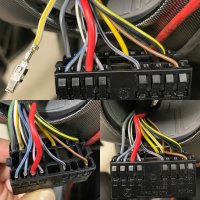 Audio upgrade: Another "must" was to do "something" for the original speaker system on which the l/h door speaker didn't even work - or now it might after I found the cone being jammed somehow and it suddenly started to move again after pushing it manually. Anyhow. At first had to dampen the doors properly: for the outer plate first Silent Coat 2mm aluminium reinforced butylmat and on top of that StP AeroFlex 6mm thick "foam". On the inner plates I used StP Black Silver 1.8mm thick mat;

Hello, My newly acquired T6 has DynaAudio fitted. Before I start removing door panels to investigate, does anyone know if it comes with any sound proofing fitted as standard? Is this option, just better and more speakers with a DSP. On my previous T5.1 Cali , adding sound deadening to the...

Speaker set is BLAM 165 LSQ Live (yes, went from the original 8" woofers to 6,5 inch partly due to difference in price but also as knew there's going to be yet an active subwoofer). And as it felt so pity to hide these all bought a pair of speaker grills just for the emblems which where embed on the door card. 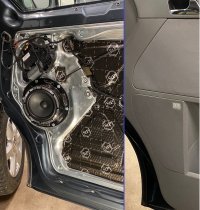 The tweeters of this 2-way system were mounted on the original places using aluminum plates manufactured by one friend. Also here took the original emblem off from the speaker and embed those on the original grills instead. 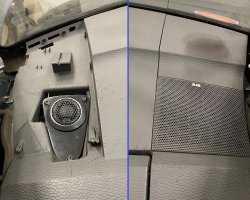 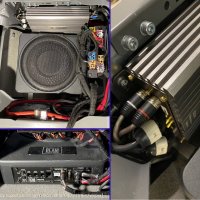 Pioneer AVH-X390BT was the choice for headunit thanks to 3-way low- and high-pass filters together with equalizer etc. - and as found such 2nd hand from another friend. Naturally since there's a reverse camera option on these couldn't resist getting the camera module (Pioneer ND-BC8) which was mounted on the license plate light panel utilizing OEM-parts from a T5GP / T6. So as stock installation from outside as possibile - even obviously reverse camera option never existed for pre-facelift T5's. 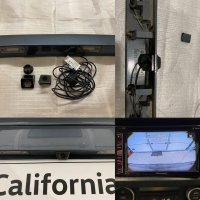 Interior: My first Cali had a leather trimmed multi-function steering wheel unlike this current one. The basic one not only looks but also feels too cheap so had to find an alternative. At first I had some Passat steering wheel coming as it looks quite much like T5GP one and there would have been airbags easily available. But getting the buttons to work seemed to be too large questionmark so searched for a few options as plan B. Eventually ordinary leather steering wheel from a 6R Polo (2010-2014) was good catch for eye and also for wallet. New slip ring (actually steering wheel, airbag and slip ring are each from a different Polos) required very minor grinding for fitting on a T5. At the same looks much younger and still original whereas some flat bottom model would not be enough period correct. 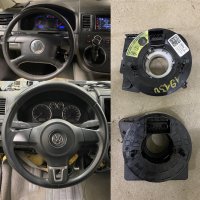 At the same threw in a set of aluminum rings to reduce the Transporter-look a bit further (just wish there was be more Multivan Highline speedometeres on market with oil temp and charge meters - that would be a proper upgrade despite of the hassle with getting ODO reading transferred and immobilizer recoded). 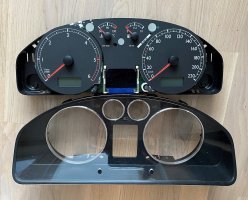 Then once the driver's seat was off from the car for the audio installation took the opportunity to renew cushion that didn't feel very solid anymore - and during dismantling it was easy to see why. 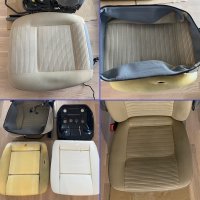 M
Brakes seized on when parked up for a long time