In less than two weeks we will take off for a trip through the Spanish Pyrenees, from the Mediterranean to the Atlantic Ocean. We have taken our inspiration for this trip the last two years from a variety of sources (see this link for an interactive version of our inspiration map):

We will probably be 'flip-flopping' between these while en route.

Going there we plan to dash to about Lyon, and then leave the (in)famous 'Route du Soleil' and meander south on D-roads with a minimum of three digits through some national and regional nature parcs (the green route on the map):

Roughly a week going there, two weeks through the Pyrenees, and a week going back. We will try to share some impressions here!

Here is an impression from Vibraction:

We have done a couple of trans Pyrenees trips and the scenery is just amazing, be aware that some tracks get closed in the hot summer because of the risk of fire etc. also remember not to "Crop Dust" the walkers as that can also get some tracks closed if there are lots of hikers about.

During a full morning climbing a hill I found myself Anglicising names, for example, Col du Budincurutcheta became known in my mind as the Col of the Burning Crotch.

Absolutely stunning, and some day I’ve promised myself that I’ll do it from Cebere to Hendaye - unfortunately I’ve put on a full four stone in weight since 2002!

Amarillo I need to bikepack that route! what time of year did you go?

DaveB said:
Amarillo I need to bikepack that route! what time of year did you go?
Click to expand...

For both routes, you can get a card stamped at various bars and hotels on the route which you can later exchange for a certificate and medal but we didn’t bother with that.

There are also companies which arrange accommodation and carry your luggage for you from hotel to hotel - we took a tent and didn’t bother with that either.
Last edited: Aug 6, 2019

Amarillo said:
I cycle camped that route in 2002.
Click to expand...

Ah, such spleen! Many, many years ago, when I was so much younger than today, I went from Atlantic to Mediterranean on foot, following the HRP trail, a high route roughly following the French/Spanish border crests (one foot in France, one in Spain, that idea), a lot higher up than the GR10 (French side) or GR11 (Spanish side). The HRP was not marked, like the GR's, it was described in a mountain guide by Georges Véron. Quite a walk: it took me 6 weeks! It was long before GPS, navigating with maps, compass, altimeter and binoculars!
Last edited: Aug 6, 2019

Looks like a neat trip. Will do GR11 in the not too distant future.

We have done some little bits of the route but inspired now to do the whole lot. Thanks for putting this on.

We have the .gpx files for you if you want...

Oh, oh: suddenly Marga is less keen to do the hikes, and wants us to go buy anti-bear sprays and loud horns and such...

bvddobb said:
We have the .gpx files for you if you want...
Click to expand...

That would be great, thank you.
I wouldnt worry too much about the bears. It is very rare for them to be seen and whilst they can cause a problem for the farmers it fairly unusual. We have had a house rhere for around fifteen years and walked many miles and never come across one. The popular hikes like the Odesa canyon get budy with people which the bears tend to shy away from. 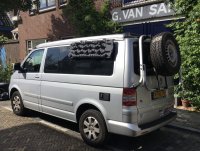 Getting ready! We have moved the spare from underneath to the back, for easier acces. And we have decided to mount brackets for the sand plates, so they can be on the outside rather than in the back somewhere.

Of course, we hope to never have to use either! Back in Iceland we never had to use either spare or sand plates.

briwy said:
That would be great, thank you.
Click to expand...

You have a PM.

bvddobb said:
We have the .gpx files for you if you want...
Click to expand...

Please may I have the .gpx files. It’s a trip I’d like to do too.

bvddobb said:
You have a PM.
Click to expand...

Thank you very much Bart. Hope you have a good time.

In the Pyrenees in our van right now, your trip sounds awesome

Skewif said:
Please may I have the .gpx files. It’s a trip I’d like to do too.
Click to expand...

You have a PM. 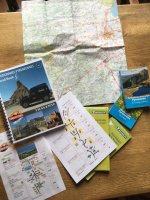