I've been reading the various barbecue threads on here. One of my hobbies is barbecuing and smoking having picked up the bug big style when I lived in Argentina 30 odd years ago.

I've got 7 or 8 different ones of various sizes and fuel. The Cadac Safari Chef seems to be popular on here and rightly so. The Carri Chef 2 is good too. I have both. Actually I have three but thats another story.

Some of you are using the Weber Smokey Joe. Its a great little charcoal barbecue and became one of my favourites to use last summer. Whilst I love it, it needsa couple of refinements to really make it come into its own.

Firstly the addition of a temperature gauge on the top and some added air intakes in the base. Once they are done, there is only one more thing left to so. The full on smoker conversion. I spent a little bit of time looking up ways of converting the Smokey Joe into a mini smoker and finally managed to get it done.

I am certainly not going to take credit for the following. Hundreds of people have done this before me. This is just my take on an old design

It takes a while but eventually I found the right sized pot on ebay. 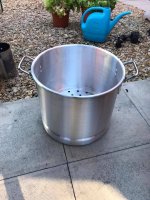 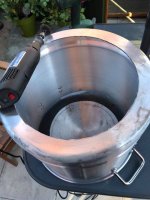 Drill 4 holes at 90 degrees to each other, thread some bolts through as supports and put a small pie dish on top to use as as a heat deflector or water bowl. You could use a terracota saucer but I found this one in a local charity shop 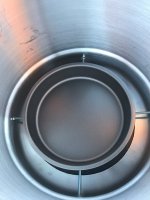 The lid is a tight fir so I just crimped the top edge with some pliers. The additional bolts sticking through are for a second grill 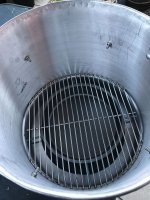 Both grills in place 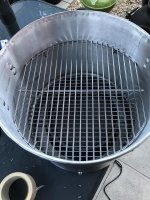 How it looks when its all done and fired up. I added some longer bolts to the top vent. I've now done that for the added bottom vents too so I have much greater control over the temperature. 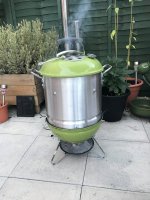 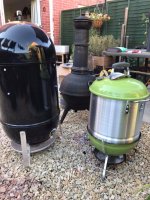 One one fill of charcoal, I can run it for around six to eight hours. It has three bottom vents that I added and the two original side vents. I use the added ones on the base more than the sides because the airflow is in a better direction because it is underneath the coals