Been looking at various options for solar backup and there seem to be lots of kits out there. We have a Beach, so fitting the controller into the jack space seems to be the best option as per the thread -> https://vwcaliforniaclub.com/threads/removable-drill-free-solar-installation-in-a-beach.14349/

One issue with this seems to be the display. All of the kits seem to use the MT50 display which needs to be hard wired in and mounted somewhere and it looks pretty bulky. So while the panel mounting is drill free, the display mounting isn't.

Victron do a controller similar to the Epever MPTT controller and you can buy a Bluetooth adapter for about £45. See here. The Victron controllers also seem to be a bit cheaper than the Epever as well. (Victron seem to be a very professional outfit doing systems up to the size you see on solar farms.)

The Bluetooth adapter allows you to connect to the controller using the Victron app from your phone, iOS or Android, to get data out of the controller and to manage the settings. See here.

Has anyone used one of these?

An additional question I have is what size controller do you need. You see various specs from 10A to 30A. Reading the specs of the controllers it seems as though a 10A controller would be fine for a 100W panel. Is there any reason you'd use a 30A controller?

Bramco said:
An additional question I have is what size controller do you need. You see various specs from 10A to 30A. Reading the specs of the controllers it seems as though a 10A controller would be fine for a 100W panel. Is there any reason you'd use a 30A controller?
Click to expand...

Thanks Loz, that's where I'd got to as well and also from the specs. I seem to remember when we had the PV installed on the house I was surprised that they used a slightly smaller controller than I had expected but on reflection realised that it was the right spec.

If you over spec the controller then you can fit a second solar panel in the future without the cost of a new controller.

Sure, but I'm pretty sure I won't be doing that as 100W should be more than enough for us on the Beach with just the one leisure battery.

Spoke to the folks at the link I put above for the Bluetooth adapter. They said that a 30A controller would be enough to manage up to 350W just as a data point for anyone for the future.

I've ordered the Victron controller 10A and bluetooth adapter, now to find the best panel and then onwards with the DIY. I'll update the thread with the results once I've managed to get things installed.

I fitted a Victron BlueSolar 75/15 with a 100w Biard panel. Works extremely well! 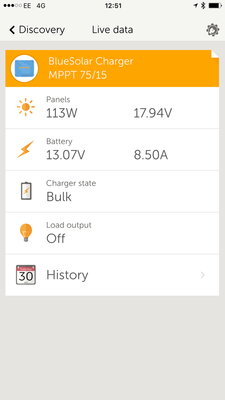 Thanks methley. Must be sunny down your way.

Finally got everything installed.

I found this very low profile aluminium coping at Clickmetal if you follow the link you'll see what I mean and you can also see from the photos below. You can order specific lengths, I ordered 1270mm which goes to the outside edge of the tracks.

I used sikaflex but for added security added some pop rivets, again you'll see from the photos. If you've bought 1270mm lengths for the mounting bars then measure 200 in for the location of the 1st pop rivet and then 174mm from there on. This makes the rivets sit over the front to back dints in the roof. Again you can see from the photos.

I mounted the Victron controller on a thin steel panel and then used the existing black screw which meant I only had to make one additional hole.

Apart from that I followed Roger's guide and everything worked a treat. Really pleased with the Victron controller and the Bluetooth dongle - excellent kit.

Nice writeup, can you specify cost and where you got the stuff from?

Will do kave. Might be tomorrow before I can sort that. I will edit the last post rather than adding a new one.

A Brit in Sweden

Order 2 Kave and we can do it together #SWISH

Those angle coping strips in the link only have a 5mm upright edge which will alow the panel to flex & bounce. I had two bird 100 watt panels mounted on 12mm aluminium bracket with rubber bump stop between angle & roof to stop flex. After two years of successful use the both failed. The tiny wire/tracks joining individual cells broke. Not possible to repair so got thrown away. I may look for low profile framed panel as a replacement & bond it to the roof.

Sent from my SM-G900F using Tapatalk

Andy said:
I may look for low profile framed panel as a replacement & bond it to the roof.
Click to expand...

Yes looks interesting BUT at £644 not for me !! Thats without a controller ! 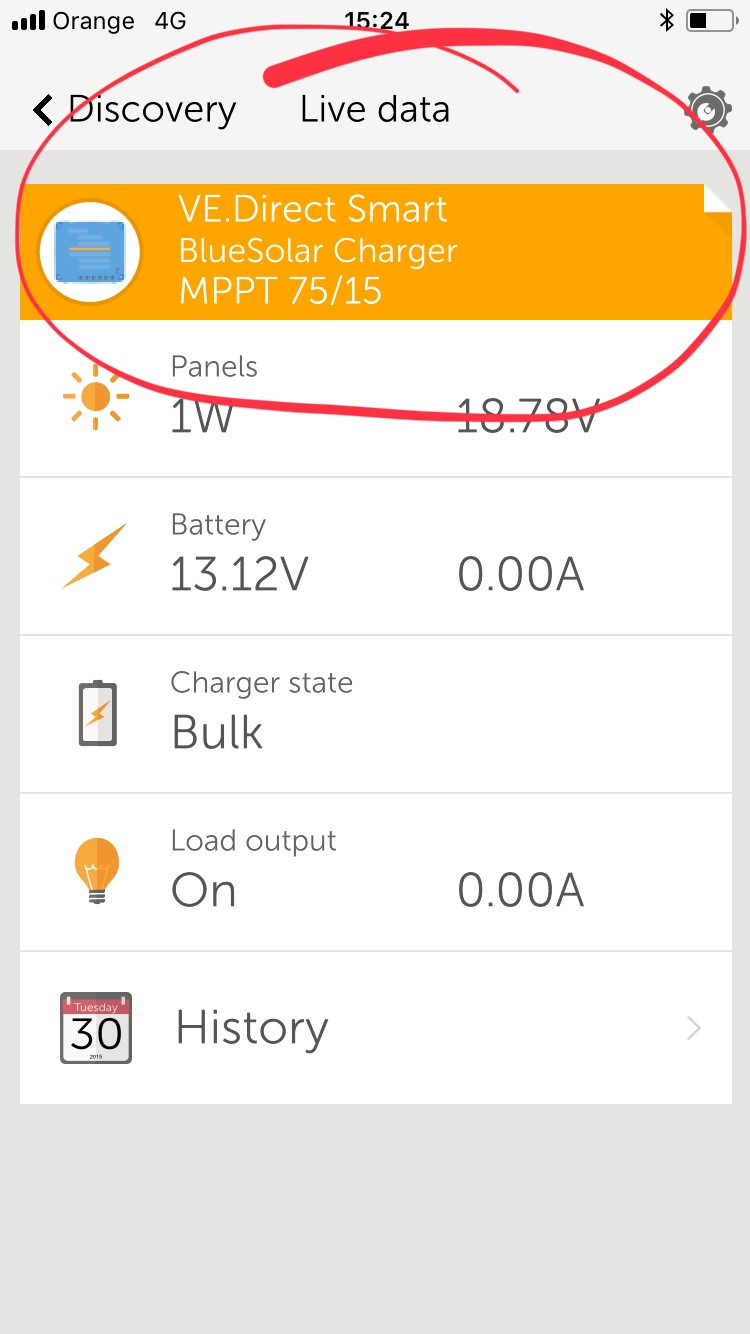 Sent from my iPhone using Tapatalk

I recommend solara marine panels glue to the roof. 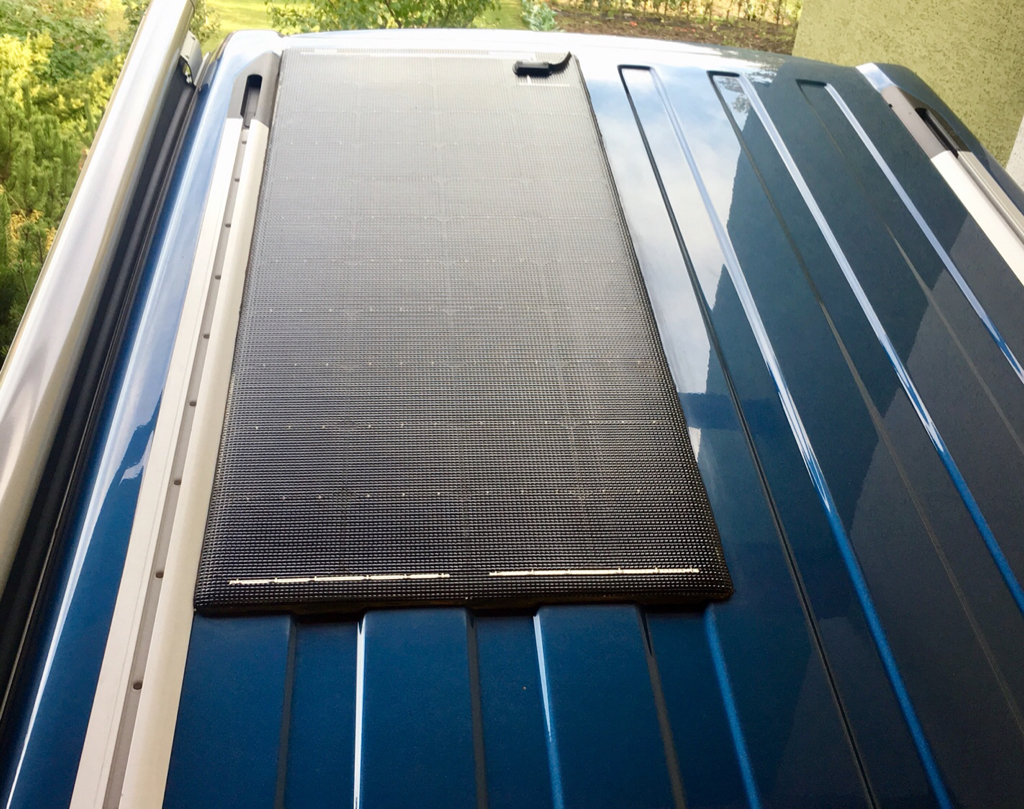 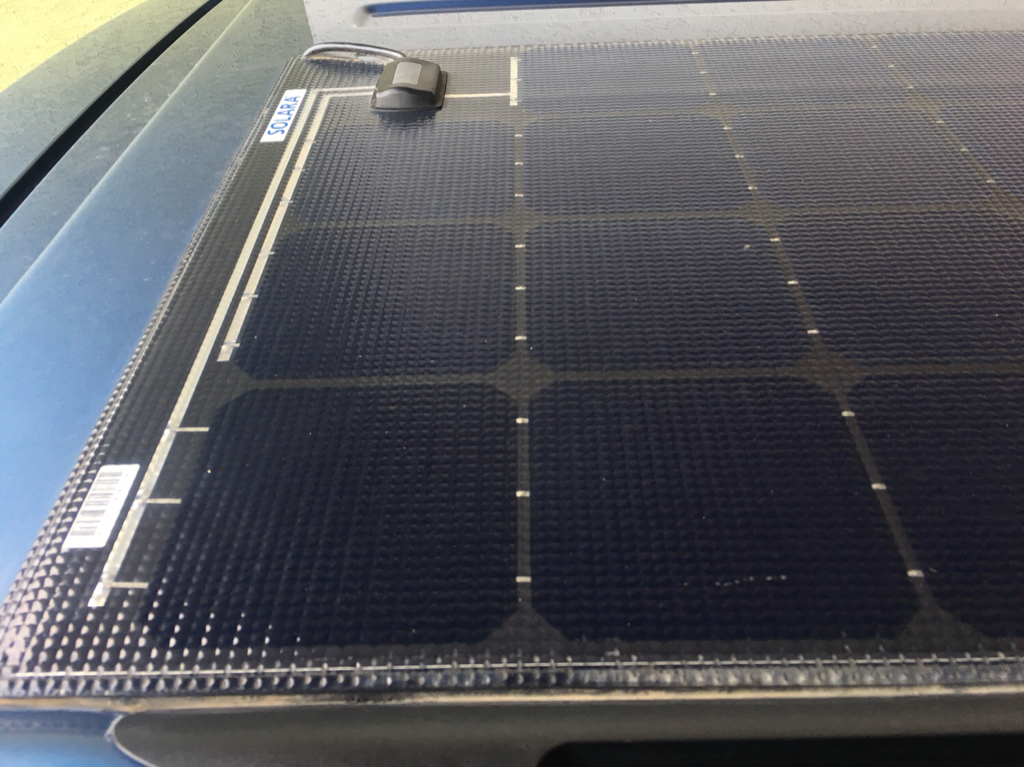 Sent from my iPhone using Tapatalk

Personally I would never glue a panel directly onto the roof.
I have had two panels fail and if they were glued on it would be a nightmare getting them off, apart from the mess it would make. 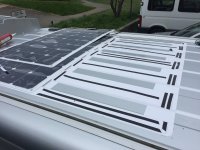 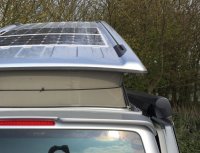 If you are after a glued down panel I put car wrap viny on to the roof first then stick the panel to the wrap. Very neat. Very secure. Invisible from normal eye height. Faulty panel can be removed without leaving a trace. Mark the shape of the panel on the roof + 5mm all round, cut the vinyl into 50mm strips, trim and stick vinyl upto marks and to tops of roof ribs under panel, stick panel to vinyl with automotive double sided tape (0.9 mm thick stuff) or sealant of your choice then just seal front and rear edges with adhesive sealant. Used 100mm strips in pic which was overkill as was the amount of tape, it's strong stuff.

Also here is my way of getting the cable inside. I do not recommend running the cables through the canvas pocket that has the anti fold out device inside as I have done. It is very neat but it bends the cable 180 deg each time the roof is opened AND closed so will break in no time if you use the roof a lot. (sorry for the duplicate post on another thread) 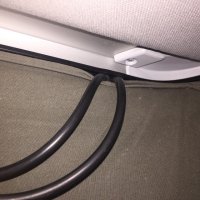 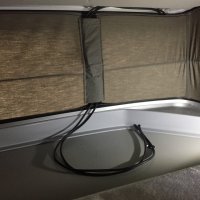 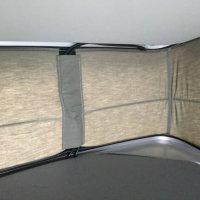 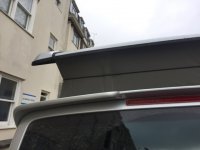 Just fitted the new panel after the last one packed up while away. I think TBH that it probably got too hot as I had put foam under the alloy supports to protect the roof which meant there was no airflow to the underside.
In 33-35 degrees I think this could well have caused it to overheat and fail.
New one straight replacement but this time helicopter tape under the supports to keep the alloy off the roof so there is plenty of airflow underneath. I had done this on a previous Cali and the panel had been fine.
I cut off the leads that were on the panel that had connection plugs on and soldered the original leads already on the van to the panel contacts.
Bought the BT dongle and fitted it, all working fine now.
As an aside, even without the panel working the fridge kept going at Level 5 in 25-30 degrees in Spain for five days before packing up. Fairly impressive I thought.

The panel is Sikaflexed to the angle and then alloy strips make sure the panel doesn't lift if the glue fails. Had one disappear previously so can only assume the glue failed.

The wires go under the panel, through black plastic end piece and over the roof. If you do this you need to take the plastic piece off and make the slots underneath larger to accommodate the wires. Plastic then glued back on.

The wires go under the rear of the roof and through a carefully positioned hole in the aluminium roof trim to the inside. The hole has a rubber grommet to prevent the wires chafing and is sealed with bath sealer. Used this method now for about five years without any problems.

Not charging much as the van has been on hook up so the batteries are fairly full.

Taff7996 said:
In a perfect world yes but a more realistic max would be about 6.5 amps with 100wat panel (full sun, noon, mid summer)
Click to expand...

Roger only fitted mine yesterday, 110 watt panel and Victron Bluesolar 75/15
You must log in or register to reply here.